The SOLIDWORKS annual release starts with feedback provided by you, our community, and finds its way to the people responsible for including your request in our annual release. For SOLIDWORKS 2015, we wanted to introduce you to some of the people responsible for the new features and let them describe their favourite tools included in the 2015 release. Today’s SOLIDWORKS Expert is Raphael Raymondeau, Senior Product Manager, eDrawings.

Raphael on what’s new in eDrawings: a new user interface is being introduced in eDrawings 2015.

The new styling for the eDrawings user interface has been streamlined to improve workflow, support touch interactions, and modernize the overall aesthetics to compliment the design themes of modern operating systems.

With the new UI, it will be easier to access the commonly used features such as view manipulation, sectioning, and measure. This will lead to improved productivity when using eDrawings to review CAD designs. The enhancements include optimization for touch interaction. This means that users on touch-enabled screens can manipulate the model view and sectioning plane with ease, rendering this an even more effective tool for presentations and collaborations – making it an overall a great way to show off what your designs.

Another note worthy update is the ability to view static SOLIDWORKS Plastics result plots in eDrawings 2015. You can publish a variety of detailed plots directly from SOLIDWORKS Plastics to an eDrawings file including Fill Time, Cooling Time, Air Trap, Clamping Force, and more. Other general simulation enhancements have also been made including improvements to display performance and the ability to show fixture and pressure arrows for added clarity to your simulation results. Be sure to keep a close eye to eDrawings over the next few months as there is much more to come!

If you would like to learn more about SOLIDWORKS 2015, check out our launch site.

Originally posted by Mike Fearon in the SOLIDWORKS Blog.

Find out more on SOLIDWORKS 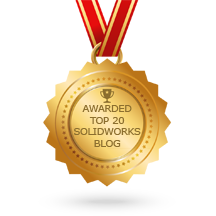